Corded vs Cordless Reciprocating Saw: Which is Right for Your Needs?

Regardless of the saw type, choosing between cordless and corded is a debate that will likely go on for centuries. There will always be those people that believe a corded saw is the only way to go and others who think you’re crazy to use anything other than cordless. The fact of the matter is there are some significant differences between a corded and a cordless reciprocating saw. Depending on the type of work you are looking to complete one of these two options may be better than the other. We will give you a basic rundown of the differences you can expect between these two saws and how to determine which one will work best for you.

SEE ALSO: Our reviews of the best corded reciprocating saws

The cut you get with a corded reciprocating saw will be a bit rough. You can cut on an angle with this saw, but you will have to hold the saw steady and follow the line yourself. You cannot set the reciprocating saw to cut on the exact angle that you want.

Many blades are available for a corded reciprocating saw. There are blades specifically designed for wood, plastic, and metal. You must match the proper blade to the material you are cutting, or you will quickly snap the blade. Corded reciprocating saws have blades available in several different lengths, depending on the project you are working on. Blades are generally between 3-12 inches long, with the most common length of 6 inches.

Teeth per inch (TPI) is the most important spec of a reciprocating saw blade. Low TPI cuts faster but with rougher edges and is best suited for cutting wood. High TPI results in slower cutting but gives you a smoother edge, ideal for cutting metal.

Corded reciprocating saws are not the safest saws on the market. Since this is a corded saw, there is going to be quite a bit of power being transferred to those blades. If power is applied correctly, there should be no issues; however, if you are a beginner this may not be the saw for you.

Corded reciprocating saws will vary in price depending on the manufacturer, size, and strength of the saw. They are generally a rough cut type saw that should last for many years as long as you keep replacing the blade.
Corded Pros
Corded Cons

SEE ALSO: Our reviews of the best cordless reciprocating saws

The primary functions of the cordless saw are going to be quite similar to that of the corded. The major difference you will find with this saw is the portability it provides. If you are working on some pruning at the back end of your property where there is no power, the cordless reciprocating saw is going to be much quicker than a hand saw.

The cordless is going to be capable of the same types of cuts as the cordless except that it may take it a bit longer. If you are going to be going through a thick piece of wood, you will want something with the power of a corded saw. The cordless will be better for detailed type cuts because the fact that it is battery powered will make it just a bit less powerful than the corded model.

The blades between the corded and cordless saws will be the same.

Generally speaking, because the cordless saw is a little less powerful, it will also be a little safer. The cordless saw seems to bounce around a bit less when trying to make cuts. It is a better option for a beginner because you don’t need to worry about cutting the cord either. Overall, it just makes for a much safer piece of equipment.

If you look at the price of the saw alone, the cordless usually seems cheaper than the corded version. However, when you look a bit deeper, the lower price typically does not contain a battery. By the time you purchase the battery, the charger, and the saw itself, the cordless options tend to be a bit more expensive.
Cordless Pros
Band Saw Cons

Which Saw is Right for Your Needs?

Determining which of these saws is going to work for your needs will come down to two basic questions. Where do you want to use the saw? And what are you using it for?

If you do not have access to an electrical outlet or you are going to be fifty feet from the closest electrical outlet, you may want to consider the cordless reciprocating saw. Although you will lose a bit of power, you will not have to set yourself up to have power continually. In some cases of demolition work where you want to move quickly and tackle large areas, plugging your saw in over and over in different locations is going to slow down the work process.

Corded and cordless reciprocating saws are capable of cutting various types of material. However, if you have thick wood or metal to cut through, you are going to want the corded version. The little bit of difference in power is going to make the job much more comfortable. When cordless saws are faced with complicated cutting tasks, they will drain their battery very quickly.

A cordless reciprocating saw is a bit heavier than the corded. The weight of the battery tends to weigh the saw down quite a bit. This is not an issue if you plan to pick up the saw and make a few small cuts. It becomes an issue for workers who need to have a saw in their hands most of the day or continually lug one around a job site. 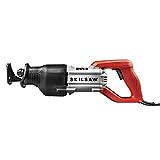 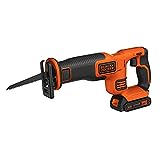 It is impossible to say which of these two saws, the cordless or the corded reciprocating saws, is better. Both options have their positives and negatives. Be sure to carefully analyze your sawing skills and the task you have at hand before making any final decisions. Try not to use price as the determining factor when choosing a reciprocating saw. The differences are not enough that you should use this as your determining factor.

When comparing Husqvarna’s 450 and 455 chainsaws, the issue of which was better was a matter of math. It would have been simple to look

Table Saw vs Circular Saw: Which One Should You Choose?

Graco Magnum X5 vs X7: Which is Best for Your Needs?